Meet the team behind Stockport Youth Orchestra. A professional team with a wealth of experience in the music industry. 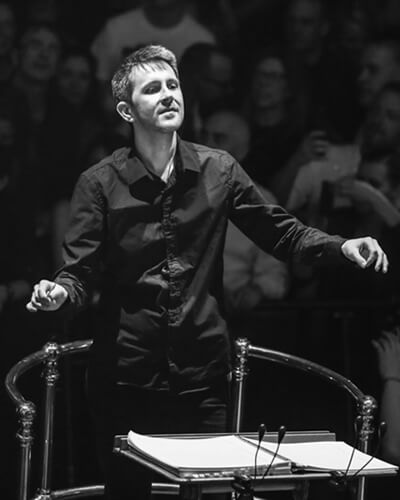 Tim Crooks has a wealth of experience in different sectors of the music industry, from live performance to orchestrating and recording.

Originally working as an orchestral violinist Tim quickly advanced to writing and arranging for recordings and live projects, including pop tracks, film scores and orchestral projects. His wide-ranging performing career has taken him to the BBC Proms, Cheltenham Festival, on tour with acts including Bill Bailey, Leslie Garrett, Thea Gilmore, and broadcasting on TV and Radio.

His pop string writing for Manchester String Quartet has been featured by Jarvis Cocker on 6 Music and has led to recording three albums of his arrangements. As a music educator Tim has led projects for Manchester Camerata and Opera North (In Harmony), and has worked with Stockport Youth Orchestra since 2006.

Chris Orton is active as a recorder player, teacher, conductor and student of Dalcroze Eurhythmics throughout the UK and Europe. Since graduating from Birmingham Conservatoire in 2004, and after further studies privately with the recorder player Anneke Boeke in Amsterdam, he has developed a portfolio career in performance and music education, dedicating equal amounts of passion and commitment to both. He currently holds teaching positions at the Royal Northern College of Music where he runs the recorder departments in both the senior college and junior school, Chetham’s School of Music, Birmingham Conservatoire, the National Youth Recorder Orchestra and Stockport Youth Orchestra. Chris taught for ten years for Manchester Music Service providing ‘first access’ and music and movement classes in inner city primary schools, and conducted central ensembles with Birmingham Music Service.

In recorder performance, Chris enjoys the whole range of repertoire; in particular, he has performed a considerable amount of 20th and 21st century music for recorder, often with live electronics or with other instrumentalists. He has been active commissioning new music, and in particular introducing the recorder to student and professional composers at conservatoires throughout Europe. such projects have taken place at the RNCM, University of York, Krakow Academy of Music and Escola Superior de Musica de Catalunya in Barcelona. Chris has also performed solo recitals at notable contemporary music festivals in Amsterdam, Krakow and Huddersfield. Most recently Chris was invited to perform a recital at Dulwich College, Singapore, including new music for recorder and piano.

Early on in his career Chris was successful on the international competition circuit. Highlights include winning the 1st prize at the Moeck/SRP International Solo Recorder Competition in 2007, a £20,000 BBC Performing Arts Fund Bursary (2007), 2nd Prize, ‘Prix du Jury’ and Gaudeamus Prize at the International Competition of Contemporary Music ‘Krzysztof Penderecki’ (2006), Silver Medal of the Worshipful Company of Musicians (2004) and the first ever John Hosier scholarship in 2003. Whilst a student in Birmingham, Chris was the first winner of the Symphony Hall Recital Competition, and thus gave the first solo recorder recital in Symphony Hall. In 2012 Birmingham Conservatoire awarded him an HonBC for his achievements since graduation.

Chris believes one of the best ways to remain relevant as a teacher and performer is to continue learning, formally and informally. Recently Chris has undertaken formal study of Dalcroze Eurythmics and passed all practical and theoretical examinations for the Certificate qualification of Dalcroze UK. Most recently Chris studied conducting at ESMUC in Barcelona with Jordi Mora. All these different strands of music making and learning enhance each other, and all enhance his passion for teaching and helping others explore the musical world.

Become a patron or sponsor the Orchestra.